Posted on February 1, 2019 by DJ (@MyLifeMyBooksMyEscape)

Welcome back to the Boskone 56 Mini Interview series! It officially the first day of February and we are now 2 weeks away from Boskone! To help celebrate this, today we are chatting with Ellen Datlow, Mike Olshan & Max Gladstone!

Ellen Datlow has been editing science fiction, fantasy, and horror short fiction for over thirty-five years as fiction editor of OMNI Magazine and editor of Event Horizon and SCIFICTION. She currently acquires short fiction for Tor.com. In addition, she has edited more than ninety science fiction, fantasy, and horror anthologies, including the annual The Best Horror of the Year, The Doll Collection, Black Feathers, Mad Hatters and March Hares, The Devil and the Deep: Horror Stories of the Sea, and The Best of the Best Horror of the Year. Forthcoming is Echoes: The Saga Anthology of Ghost Stories. She’s won multiple World Fantasy Awards, Locus Awards, Hugo Awards, Stoker Awards, International Horror Guild Awards, Shirley Jackson Awards, and the 2012 Il Posto Nero Black Spot Award for Excellence as Best Foreign Editor. Datlow was named recipient of the 2007 Karl Edward Wagner Award, given at the British Fantasy Convention for “outstanding contribution to the genre,” and has been honored with the Life Achievement Award by the Horror Writers Association and by the World Fantasy Convention. She lives in New York and co-hosts the monthly Fantastic Fiction Reading Series at KGB Bar. More information can be found at http://www.datlow.com, on Facebook, and on twitter as @EllenDatlow.

Honestly this is the first time I’ve been back to Boskone in more than 20 years. I used to attend regularly when I was working for OMNI Magazine (and had an expense account), but I stopped going once we folded. The reason I came back this year is because my friends Liz Hand and Gardner Dozois were GOH. I’m so sorry Gardner isn’t here so I can hang out with him one more time. I also figured it would be a great time to see what’s been going on since I last attended.

Bladerunner. It was gorgeous, it seemed to channel William Gibson’s sprawl (I published most of Bill’s short stories/novelettes in OMNI), and was elegiac, sexy, weird, romantic. I’ve rewatched it many times and am never disappointed. 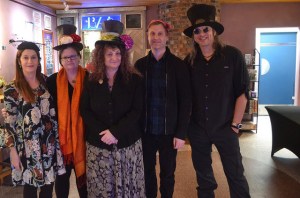 I have some great photos from events I did with some of the contributors for MAD HATTERS AND MARCH HARES, my Alice in Wonderland anthology. The photos are whimsical and true to the book.

Echoes: The Saga Anthology of Ghost Stories is a huge ghost story anthology (3 reprints) that will be out August 2019.
The Best Horror of the Year: Eleventh Annual Collection will be out around June 2019.
I’m working on a very special project for Subterranean Press that hasn’t yet been announced and won’t be out till 2020.
Have two novellas I’ve acquired and edited for Tor.com that will be published in 2019.
About nine stories I’ve acquired for Tor.com website coming out in 2019.

Mike Olshan is a New York-based journalist, editor and photographer who has been archiving 16mm film for over 40 years. He was formerly editor of the film/TV production journal Millimeter and of Videoplay Magazine. He’s best known as the screening producer and film show host Movie Mike. Mike has produced and hosted screenings outdoors in community gardens and in museums, film workshops, galleries, community centers, pub backrooms, steampunk events and SF conventions. His work includes screening and lecturing at the Anthology Film Archives, Millennium Film Workshop and the Robert Beck Memorial Cinema. A film photographer who favors the use of high-end vintage equipment, Mike’s a Board member at the Brooklyn Waterfront Artists’ Coalition. He’s a frequent contributor of photos, copy and research for the forgotten-ny.com website.

It is a major event in my area.

In 10 words or less, how would you recommend Boskone to a friend or fan?

A lively large convention with lots of interesting programs.

Three Strangers, which is a well-written and well-acted story built entirely on character development in which the three principals are shown though their actions to be entirely different than you might think when they are firs introduced.

My unpublished underground comic book script Tales of Lost Atlantis which distills the essence of my hippie idealism in the period when I wrote it.

What is your favorite memory of a fan interaction at a convention? It could be you as a pro interacting with one of your fans or you as a fan meeting someone you admire.

I went down to the dealers room and behind one table I met the woman I lived with for the next eight years.

No, but I have a few favorite works of art I bought at convention art rooms.

I am preparing for a contrast corrected theatrical quality 4K video master of the 16mm film print I cut together and showed at Boskone a few years ago retelling in complete continuous detail the 1940 Flash Gordon serial, which version I have titled Mission to Mongo.

Who is your favorite literary character of all time? What is it about this character that you admire?

Hard to say but I do like Kurt Russell’s action hero who is fearless because he really does not care if he lives or dies in the remake of The Thing. He is completely nihilistic, dead inside. I am not saying I would want to be like that myself, just that he is a great character. He appears again as virtually the same character in Escape from New York.

Max Gladstone is the author of the Hugo-nominated Craft Sequence, of which the most recent novel, RUIN OF ANGELS, was released in September 2017. Max’s interactive mobile game, CHOICE OF THE DEATHLESS, was nominated for the XYZZY Award, and his critically acclaimed short fiction has appeared on Tor.com and in Uncanny Magazine, and in anthologies such as _XO Orpheus: Fifty New Myths_ and _The Starlit Wood: New Fairy Tales_. In addition to his solo and creator-owned work, Max is the lead writer on the BOOKBURNERS serial, a contributing writer on THE WITCH WHO CAME IN FROM THE COLD, and contributed a comic for the Kodansha Press anthology GHOST IN THE SHELL: GLOBAL NEURAL NETWORK. Max has sung in Carnegie Hall and was once thrown from a horse in Mongolia.

I love Boskone’s literary focus, its consistently high level of programming, and the space it allows for neat things to happen.

Most of the artwork I love opens over time with rereads and rewatching, but I’d love to be able to go back and read Dorothy Dunnett’s Game of Kings for the first time again. Part of the joy of that first read-through is coming to understand what Dunnett is doing with Lymond, how she’s hiding her tricks, and what all the chaos is aiming toward. Once you understand the whole picture you never experience that same sense of the book “clicking” into place again.

Amal El-Mohtar and I took what would become the author photo for our upcoming novella THIS IS HOW YOU LOSE THE TIME WAR at World Fantasy, after a choreographed duel we’d filmed to promote a project. John Clute walked past in the background as we were swinging swords at one another; I have no idea what, if anything, he thought about walking past a swordfight in early autumn outside the con hotel. 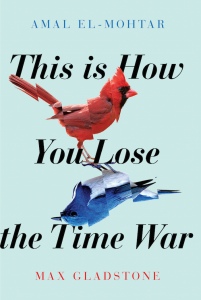 My novel EMPRESS OF FOREVER comes out on June 18 of this year?a space romp, starring a woman from our Earth thrown into the center of a galactic conflict in the far future. Vivian Liao’s just trying to get home, but she may have to save the galaxy to do that.

Amal El-Mohtar and I have cowritten a novella, THIS IS HOW YOU LOSE THE TIME WAR, due out in July. In TIME WAR, two enemy agents in a war between two different possible futures start trading mocking letters. But as their correspondence deepens, they find they have more in common with one another than with the futures they’re theoretically trying to bring about…

They’re very different, very grand pieces of work, and I’m so excited to share them with people this summer.

DJ is a year 3 medical student in his clinical rotations, who in his spare time, loves to interview authors about all the books that he has no time to read :)
View all posts by DJ (@MyLifeMyBooksMyEscape) →
This entry was posted in Boskone 56, Mini Interviews. Bookmark the permalink.