“What a piece of work is man. How noble in reason…”

Science fiction readers are familiar with other forms than man, some equally admirable. Some might appear nightmarish or cuddly or, er, ordinary like the creature next door (almost!). Some mirror our fears and aspirations; some are just shiny. 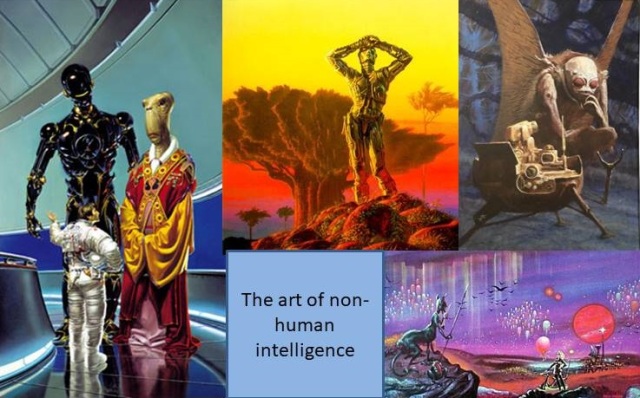 Join us at the next Boskone special art exhibit where we explore the creatures of the universe as imagined by some of the greatest artists of the field, past and present. See how genre illustrators have depicted intelligence within non-human beings, from aliens to underpeople.

For more than a hundred years, we have imagined aliens and robots, genetically engineered intelligences and cyborgs. Are sapients always readily identifiable? How do artists overcome the challenges of conveying intelligence?

Join us as we see non-human intelligence through the eyes of accomplished illustrators of the science fiction genre. As always, the Boskone special art exhibit is sourced from the collections of artists and local enthusiasts.

To learn more about Boskone’s Art Show as well as how to exhibit your work, please visit Boskone’s website or contact us via email at artshow@boskone.org.

A fan since 1965, Joe Siclari started reading science fiction a decade earlier with Murray Leinster’s Forgotten Planet. Joe has been active in almost every aspect of fandom: he published over 100 fanzines, plus many convention publications, started several SF clubs and founded conventions including SMOFcon, Tropicon and FanHistoricon. Joe chaired MagiCon, the 50th Worldcon in 1992, and has worked on over 250 other conventions. In 2005, Joe was elected as DUFF delegate, and in 2016, he & his wife, Edie Stern, were recipients of the fannish Big Heart Award. Joe has a long-time SF interest is fan history. He has written about fandom for S-F reference books; co-edited the Hugo nominated Worldcon Guest of Honor Speeches with Mike Resnick and published Harry Warner’s A Wealth of Fable. Since 1994 he has chaired the FANAC Fan History Project which has put over 55,000 pages of photos, articles, fanzines and memorabilia online at FANAC.org and FANCYCLOPEDIA.org plus a Fan History Channel on YouTube. Joe has an enormous collection of fan publications and a museum of fannish memorabilia, parts of which have been exhibited at many Worldcons and other conventions since 1989. Joe and Edie also collect S-F illustration art, working on 15 special exhibits at Worldcons, World Fantasy Cons and regionals.

Edie Stern spent 40+ years in Information Technology, contributing in areas as diverse as: integrating the internet and the telephone network; putting touchscreen computers in 18 wheeler trucks; and leveraging technology to allow the elderly to stay in their homes longer. She has more than 180 issued US patents. Edie was the 2012 recipient of the American Society of Mechanical Engineers’ Kate Gleason Award for Lifetime Achievement. Edie is an avid and active science fiction fan, from writing and editing fanzines, to working dozens of conventions at the regional and worldcon level. For years, she and her husband have organized special art retrospective exhibits. In 2016, they received the Big Heart Award. During the last two years, Edie has also been the Webmaster for FANAC.ORG, the Fanhistory Project website, and started the Fanac YouTube channel (youtube.com/fanacfanhistory) with relevant audio and video. She loves and collects SF&F books and their cover art. She also enthusiastically engages in yoga, spinning and knitting.

This entry was posted in Art, Boskone 55. Bookmark the permalink.