At Boskone, you’ll find folks working on a wide variety of projects in the realm of science fiction and fantasy. Today’s mini interview participants shine a spotlight on all the behind-the-scenes action.

Richard Shealy is a freelance copyeditor specializing in SF/F work from short stories to novels but has worked in broader genre as well. He works with both traditional publishing houses and self-publishing authors. Find him online at his website, Facebook and Twitter.

A beautifully snarky urban fantasy by a pseudonymous author! What excites me about it is what excites me about everything I do in this job: I’m able to turn a mindset/skill set I’ve had all my life into something that helps genre be even a little bit better. And that’s the challenge of the work, as well: weighing the artistic decisions and trying to figure out how best to make sure the author’s artistic vision comes across to the reader exactly as intended.

When I realized that fandom was not this distant, detached concept but something I could actually take part in without any of the negative stereotypes of fandom promulgated by mainstream culture. Not only was I finally able to interact with people who *get* my enjoyment of genre fiction, but it also inevitably led to my becoming a genre professional: I was able to take a lifelong mindset/skill and turn it to the benefit of genre while getting *paid*. It’s a wonderful life when you’re able to combine love and a paycheck!

Who is your all-time favorite fictional character? What is it about this character that you love?

Holy cow, Gimli. Everyone’s (rightly; I don’t begrudge that one bit) gaga over Legolas, but Gimli’s a guy who’s frankly, by comparison, just a working stiff, someone doing his job unconcerned with flair, elegance or grace. No matter what happens, he finds a way to just keep going.

Deirdre is a Boston-based film critic. She is currently a staff writer for FilmThrills.com, but also contributes to the Brattle Theater, Rue Morgue Magazine, Paste Magazine, and Cinematic Essential. Find her online on Twitter.

How would you describe your work to people who might be unfamiliar with you?

If you could recommend a book to your teenage-self, what book would you recommend? Why did you pick that book?

The Handmaiden. I can’t believe that it took me so long to read it! It is really satisfying to read a book that aligns so well with my feminism and politics, but it somehow more hopeful than I am. The encouragement would have meant a lot to a younger “me.”

Who is your all-time favorite fictional character? What is it about this character that you love?

I always liked Nancy in A Nightmare on Elm Street. She was smart and refused to live her life in fear, but could be vulnerable too. Showing humanity shouldn’t be a weakness. 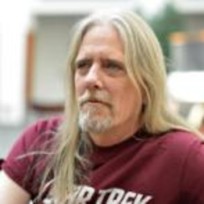 I’ve been a fan since 1964 when I first watched Fireball XL5 I publish Amazing Stories and our first book of original fiction will be released shortly I’ve worked cons and Worldcons, published fanzines and think FIAWOL is an understatement. Find him online at the Amazing Stories website, Facebook and Twitter.

How would you describe your work to people who might be unfamiliar with you?

What is it that you enjoy most about Boskone?

I really enjoy Boskone’s mix of fan generations: the convention (and its people) have deep connections to fandom’s history, and makes this accessible to a growing number of newer, younger fans. They, in turn, help keep fandom relevant, energized and exciting.

My discovery of Heinlein’s Starman Jones novel in my elementary school’s bookmobile.